If you have purchased this and are missing the blue sun visors with the fixer then go into the debug dialog and untick DX9 Style Alpha Func. 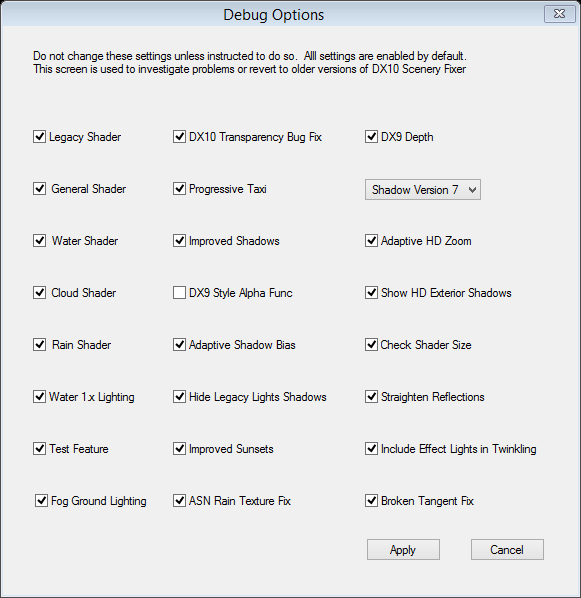 I have replaced DX9 Style Alpha Func in v3.1 (to be released before Christmas)  with new options better support this.

For anyone who is interested alpha testing is a technique best used for cutouts such as FSX trees which are texture drawn on billboards.

The Sun Visor in this model is using Alpha Blending and there is no actually value that I can see in using an Alpha Test here.

DirectX9  supported about 8 flavours of AlphaTest (>, == <, >= <=, != etc) and these are all faithfully reflected as options in FSX materials.   In normal usage in FSX its hard to think of any useful case other than discarding all pixels with an alpha below some threshold value.  (The Alpha Test which is which pixels to keep would then be > or >=)

DirextX10  doesn’t support AlphaTest – instead you have to test the alpha yourself in the shader and discard.   Given that, Aces only implemented one of the AlphaTest options in the Dx10 shader which corresponds to the Alpha Test >.

I don't use FSX that much. But I am very annoyed when it doesn't work properly!
View all posts by stevefsx →
This entry was posted in Uncategorized. Bookmark the permalink.
%d bloggers like this: